After the Sun and Other Stories 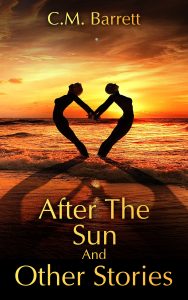 From eight-year-old Celia, who feels homeless because her mothers are estranged, to unhappily retired Harriet, who resents the ease with which her wife has made a purposeful life, After the Moon and Other Stories highlights the challenges and struggles for women to find love and to keep it alive in different phases of their lives.

Runaway: Before they’d come here to Julie’s mother’s house, her other mother, Sandra, had shouted, “If you could ever admit that you made a mistake.” Celia wished she could say that to Julie. Sometimes she tried to be very good so Julie would love her, but she always made a mistake, and Julie told her to go away. This time she would. She would go away forever, and maybe Julie would worry.

The Bridge: Smart women didn’t make messes of their lives; they married men who were around for their children’s births, who paced the floor of the hospital or held their wives’ hands in the delivery room and said, “Visualize waves in the sea.”

After the Sun: Too much talk had ended her last relationship. It was easier to be alone, except during those periods, more frequent lately, when isolation was a weight heavier than silence.

Comfort My People: Although I told myself at least a dozen times a day that I’d rather sing solo than in another off-key duet, the abrasive spirit of the holidays scraped away my veneer of resolute independence.

Of the Living: Like to wear gloves, she would, as if some disease lingers on the surfaces, waiting to assault Theresa the Pure, the unfortunate daughter of Nell the Whore. My body may be in the grave, but my spirit has no intention of departing until a certain daughter has the decency to mourn me.

In Times of Drought: Bees darted among the flowers. “‘How doth the busy little bee improve each shining hour,'” she muttered. Why did even the smallest creatures have purpose to their lives when she didn’t?
Ask the Moon, Chapter 1 New Year’s Eve made Finn think of endings, not beginnings. Already afraid that the Y2K bug would end life as she knew it, she tried to veto her lover’s proposal for a party to celebrate the new millennium. Finn hated the idea of adding auld acquaintance melancholy to the death of civilization.

Available at These Retail Sites