Today, April 4, it’s snowing and has been all day. My kitten, Roo, has been sitting all day in front of the sliding doors watching. Maybe she’s tracking the fall of each snowflake. Maybe she’s been lulled into a snow-induced trance.

To make it clear how much she’s engaged with the falling snow, this morning, at the time when she expects treats and complains about the slightest delay in receiving them, she instead continued her snow vigil. Only later, when the snow had temporarily stopped falling, did she review her morning and remember what had been missing from it.

While she meditated, I agitated.

Snow in April, so unfair. Should I go to my chi kung class? I never miss it. It’s only down the road, but the parking lot hasn’t been plowed. My car is covered with snow. The roads might be unsafe. But I always go. I hate to miss it.

On and on the cycle of anxious thoughts went until it was clear that even if I suddenly changed my mind and decided to go to the class, I would be very late. Then I relaxed.

It is said that animals are creatures of habit that follow strict and unvarying patterns for the purpose of safety and protection. Yet this morning, I was the creature made anxious by a deviation from my invariable routine. Meanwhile, the animal forgot her habits and sat by the sliding doors, enraptured by the wonder of snow. 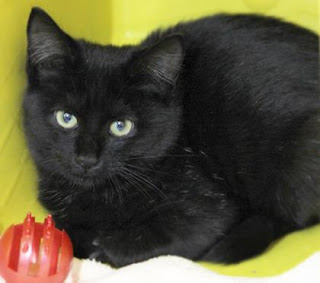 Sometimes mindfulness is simply listening to your inner knowing.

In January 2016, I adopted a black feral kitten. Roo (short for Roisin, meaning “Rose,” and pronounced “Roo-sheen”) was five months old. She’d been feral until she’d been four months old.

This made her at best a difficult kitten to socialize. Feral kittens get socialized to learn what is safe and what isn’t during the their early months. Any unfamiliar experience can activate their desire to find safety. After two months of age, feral kittens are considered much more difficult to socialize. Many rescue organizations recommend that feral kittens four months or older be trapped, spayed or neutered, and released.

I was looking for a companion for my three-year-old black cat, Pangur, and I visited the web site of the shelter where Roo was living. I wanted a different colored cat, like a tabby or gray tuxedo. I wanted an older, less adoptable cat. One day, though, I noticed that Roo had been there for a month. Something switched on inside me, and I said aloud, “That’s it. I’m adopting her.”

I looked at the clock. The shelter opened in ten minutes. I got into my car with a cat carrier and drove there. All the way there, I argued with myself. What happened to the tabby, to the older cat? This was surely a very feral kitten. Was I acting impulsively? I kept driving, even though I felt like a lunatic.

I got there and visited with the kitten, who mostly hid from me. I decided that I had to hear one purr, even if it was tiny. I needed some confirmation of my intuition. After half-an-hour, I was ready to give up when I heard it, an infinitesimal vibration in her throat. “Do it!” intuition shouted, and I was mindful enough to listen.

Now, eight weeks later, I’m so glad I did. It’s been a process. She still runs away from me when she’s in active mode (since she’s a kitten, that’s often), but at night she sleeps next to me, and when she’s drowsy, she loves to be petted. She even lets me rub her belly, which to many is the ultimate sign of trust.

The best part of the story, though, is that my three-year-old cat, Pangur (another black cat) and Roo are inseparable. They play together, groom each other, and sleep together.

And when I look at this beautiful kitten, I remember how clearly intuition spoke to me and how mindfully I listened. Every time I see her, Roo serves as a reminder that the voice inside will never fail me.

Note: If you would like to adopt a feral kitten, here are some suggestions from Alley Cat Allies.

I don’t always do this, but this Thanksgiving I’m going to make a list of the many things for which I’m thankful.

Among these things are the many examples of seen of people who have risen above the limitations of prejudice and bigotry to welcome those who need who need new homes and communities and to offer support to those who have been the victims of vandalism and hatred. 7-year-old Jack Swanson is a shining example.

We can also take comfort in seeing how animals don’t see themselves as separated by species.

A Cat, a Fawn, and Louis Armstrong’s Wonderful World.

If you celebrate Thanksgiving, I wish you a blessed day and reasons every day to feel blessed.

Recently I listened to an interview with Carol Look, who teaches EFT (Emotional Freedom Technique) and who has created some very useful teaching tools in audio and DVD form.

In the interview she described how, if you’re in a negative mood, you can shift your focus. Some of the methods she listed were petting your cat or dog, taking a walk in nature (which can include a city park), and listening to music you love.

This may sound simplistic, and I’d rather say it’s simple, by which I mean easy. Because of its ease, simple methods for changing one’s mood get overlooked. We are so trained to believe that only the complicated and difficult methods can help us change our lives. That’s another way of saying we must struggle and suffer so that we appreciate the achievement of our goals.

The trouble is, after a long journey of struggle and suffering, we are often too exhausted to be appreciative. We’d rather take a nap.

When we, instead keep it simple, we’re able to enjoy the journey. The purring cat or tail-wagging dog, the pleasure of watching birds fly, or the pure enjoyment of music you love are their own rewards. When we change our focus, we aren’t waiting to be happy. We are happy and ready for more.

What could be more creative?